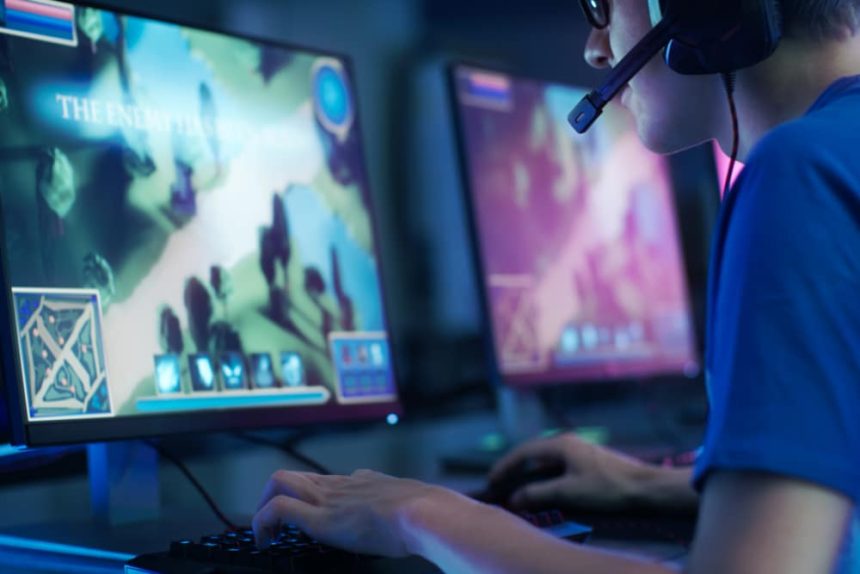 Gaming is hugely popular in China, where gamers continue to defy the stereotype that theirs is a solitary hobby. Chinese gamers have always used internet cafes as a venue for playing; these cafes are now gentrifying to meet a more demanding clientele. But gamers aren’t just demanding plusher seats and better drinks.

The phenomenon of watching eSports is fueling a new demand for venues that enable fans to follow these digital spectator sports in a social environment.

eSports is hugely popular in Asia, where video games are played as competitive spectator sports by professional teams. eSporting tournaments are major events in markets such as China and South Korea – the market in South Korea alone is thought to be worth close to $10bn. In the two years from 2014, the global audience for eSports is thought to have grown by over 40%.

eSports include both multiplayer battle arena games and first person shooter games and include major titles such as Hearthstone, Overwatch and Call of Duty: Black Ops 2, as well as more obscure games.

The prize pot for some of the bigger leagues can run to $10m and by 2020 it’s thought the eSports market could be worth over $1.49 billion globally.

League of Legends, the most played computer game on the planet, is a major draw in the eSporting arenas. Overall the market for eSports generated US$500m in 2016 and is expected to grow 22% to 2019, according to Goldman Sachs.

No wonder then that new eSporting arenas are opening around the world. A second one recently opened in Shenzhen is designed to cater to tournaments of all sizes, as well as offer 168 gaming stations – essential it’s a fusion of internet gaming café and eSporting arena.

Games developer Blizzard has a string of eSporting venues worldwide, including the US, South Korea and China. A nightclub on the Vegas strip was recently converted into an esports venue – perhaps a sign of the change in consumer habits.

The eSports phenomenon is massively popular in China, where hundreds of thousands of fans regularly tune in to watch the big games. Fans tend to have the chance to interact with the players in China’s top League of Legends eSports teams to a much greater extent than the average football fan gets to chat with his team’s players. It’s common for China’s players to join live streams where fans can approach them.

The Chinese are the world’s biggest players of online games and the average South Korean plays for at least an hour a day. It’s fuelling a whole new series of side-industries to cater to this interest, whether it’s sporting venues to watch the live games or internet cafes to follow the atmosphere in a “sports pub” style atmosphere.

China’s historical ban on video gaming consoles seems to have fuelled the interest in eSports. The ban on consoles such as PlayStation and Xbox fuelled the popularity of PC gaming, but it remained cheaper to play in an internet café than buy a home PC.

Gaming in the social environment of the internet café has no doubt contributed to the rise of eSports because gaming is seen as much less of a private home-based affair than it is in markets such as the UK.

How China is a different market

The cost structure of a gaming hobby is also fundamentally different in China compared to Western markets. A typical UK player is accustomed to buying a game in order to play.

Games are more commonly offered free in China, but sustained by in-app purchases. What this means is that there’s a low barrier to entry, fuelling popularity and creating a very different gaming demographic compared to western gaming markets.

Young female players are better represented in China’s gaming population compared to the US and UK and they make up half the playing population for China’s most popular mobile game, Tencent’s Honour of Kings.

Gaming as a form of entertainment has far less stigma attached to it in China compared to the West and hype has helped fuel the popularity of eSports.

Chinese eSports fans have a stronger attachment to their favourite teams and individual players compared to the Western eSports following, which isn’t so attached and enthusiastic. The fandom has really helped spread the popularity of eSports via word-of-mouth.

China’s 160,000 internet and gaming cafes are almost exclusively small and privately run, with only 0.2% managed by chains.

That could now change, with growing venture capital interest in this sector from the likes of IDG Capital and chains such as WYWK, which owns a small chain of internet cafes and bars. The most luxurious cafes are designed with separate rooms for private parties, couples and VIPs with full-service snack bars and top-of-the-range computing equipment.

The old dingy internet cafes of the past have really been reinvented. It’s helped by cheap capital and the potential income stream from games companies keen to promote their products.

The phenomenon is supported by the rising tide of net natives who have grown up gaming and now have increased levels of disposable income to spend on their preferred method of entertainment.

Despite the popularity of gaming, eSports venues haven’t quite caught on in the UK. There are three gaming venues in London where you can catch the latest tournament in a pub-style environment.

The largest UK arena seats only 600, demonstrating how the UK scene still isn’t anything like that of South Korea. But it could be only a matter of time before the phenomenon catches on in the West and we could see more nightclubs being converted in eSports arenas.