How Emojis Are Just the Next Stage of Language Evolution 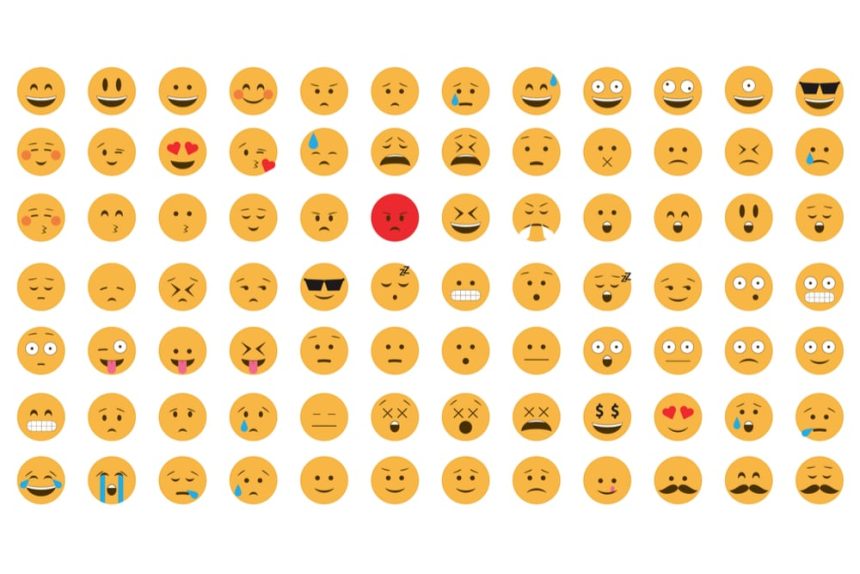 It’s common for language sticklers to decry the proliferation of emojis as examples of language decline. But in reality, this trend towards using these graphics in our communications represents a new stage of language evolution.

Emojis have been adopted across a multitude of human cultures and by speakers of many different languages because they support our digital communication – irrespective of what language we’re doing it in.

Emojis are ideographic; meaning that they represent ideas or concepts that are independent of a specific human language. Like road signs or warning notices at swimming pools or tourist locations, these attempt to communicate concepts that are language-neutral and can be understood by anyone.

An example of ideograph might be a picture of a dog with a red line through it, clearly indicating no dogs are allowed.

Ideographs such as emojis represent an idea, rather than a specific word. Human language had a strong ideographic component right from the beginning, although linguists dispute whether there has ever been an ideographic system of writing.

The ideographic roots of language

The earliest Chinese writing initially used pictogram such as wheat plants to create a limited written ‘vocabulary’ representing the world. Later this written character seems to have come to represent the sound of the word used to describe wheat.

The Chinese language is now logographic; based on written characters that represent a word or phrase. This makes it easier to convey abstract concepts, which is something a purely ideographic writing system would struggle with.

In their modern forms, both Chinese and Japanese writing systems are logographic. It’s more common however for modern languages to be phonographic. This means their written component parts don’t have any meaning by themselves but can be combined to make words that have meaning.

They can be made up of alphabetic letters or syllables. English, Spanish and Malay are examples of phonographic writing systems that use the same alphabet.

Other phonetic languages use a syllabary rather than an alphabet – Cherokee is an example. Alphabets allow for complex syllable structures, which suit some languages better than syllabaries.

For example, it would be cumbersome to represent English using a syllabary. For obvious reasons, writing systems tend to be well adapted to representing the language that uses them.

Although they may be expressive, emojis aren’t always as precise as any kind of writing system. They do however have the advantage of being universal. Unlike ‘real’ languages, emojis can be used and understood by speakers of any human language, at least, in theory.

There’s also plenty of room for cultural interpretation, even in these little icons. Japanese emoji users have a preference for those that convey feelings with eyes, whilst Western cultures favour those expressing emotions with the mouth. So although the language-neutral emoji may seem to be an international cypher, there’s room for cultural nuances.

The emoji that shows two folded hands is interpreted differently by different cultures: those based on Christian values see it as representing prayer, Japanese emoji users see it as a salutation and younger people from a secular background often think it’s a high five.

Whatever our language and cultural background, human beings were never meant to converse via a technological intermediary. We’re much better suited to face-to-face communication, using facial expressions, body language, tone and other gestures to convey our precise meaning.

Some of these may carry cultural nuances but these visual cues are universal to our species. That’s perhaps why emojis have segued so successfully into our casual messaging habits. They’re a way to add colour and tone to our exchanges and to express our intended tone.

It’s unnatural to speak with our hands tied to our sides and our faces covered because adding in gestures and facial expressions come naturally to us. That’s why emojis and stickers have found an easy place in our written exchanges – they enhance our communications.

Anyone that dismisses them as heralding the death of written language is misunderstanding their purpose – these digital pictograms aren’t intended to substitute the written language but rather to accompany it.

Languages are surprisingly adept at negotiating a change in written form. Korean successfully navigated a change in its writing system when it switched from Chinese-based characters to Hangul.

In fact, Old English also abandoned runes in favour of the Latin alphabet. Compared to switching writing system, the addition of new pictograms to accompany written text is a small leap of imagination.

There’s also precedent for new characters being introduced into established written systems. The exclamation mark seems to have been accepted into the written language in the middle ages, after it became conventional to write the Latin word for joy, ‘io’, at the end of a sentence.

This later morphed into a single symbol, ‘!’. It was only around the time of the invention of the printing press that punctuation became more systematic.

Written English picked up the letter ‘j’ rather later than the rest of the letters. But English is particularly notorious for pilfering from other languages. James Nicholl famously stated that “on occasion, English has pursued other languages down alleyways to beat them unconscious and rifle their pockets for new vocabulary.”

The same is true of many elements of our writing system – English may have picked up the ‘j’ from Spanish. It’s harder to add new items to an alphabet, or to punctuation systems, now that language rules are more formalised.

Emojis have been unusually successful at penetrating language and becoming widely adopted by regular users.

What’s unique about our adoption of this new vocabulary of ideograms in the form of emojis is that they are not language-specific. In fact, if you received a missive from someone whose language you did not speak and which contained emojis, these would be the only elements of the text you would be able to understand.

Although no-one’s proposing that emojis replace current written language, they are an astonishingly successful addition to our language.