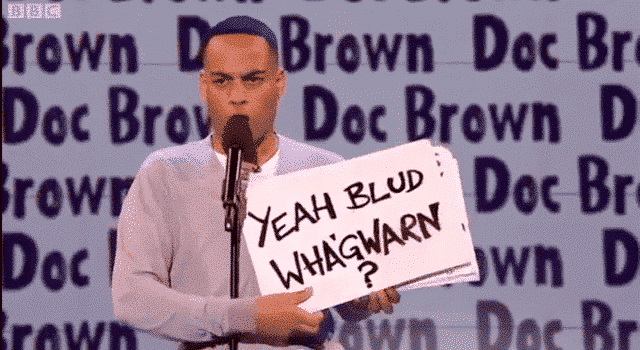 ‘Over the years I have actually developed enough middle class sensibility to know that the visual aids can really benefit a presentation. But fortunately, I’m still just working class enough to know nothing about PowerPoint’…

The comedian Doc Brown puts on a charming ‘gangsta’ accent and starts reading from his ‘visual aids’, transcreating phrases from Jamaican London slang into Standard English. He appears to be well-spoken, but ensures that the glottal stop is not the only nonstandard feature he includes in his mode of expression.

Some people who have lived in the South London area, including myself, might have a basic knowledge of Jamaican slang phrases such as ‘Yeah blud, whagwarn?’ (Hello friend, how are you?), but even I was at my wit’s end when Doc Brown showed a slide that read: ‘‘Move to me blud and ya click get shank what the rassclut!!! This is big tings fam inna bashment, choong ting and a gat duckin five-o bunnin punk like BRAP”. Would you have guessed that the correct Standard English transcreation is ‘if we ever came to blows, I may have a knife. What the bloody hell, this is how I live my life. In a soiree with a lady and a gun, avoiding the police, smoking drugs and having fun’?

This is a prime example that even within the same language, certain difficulties of understanding can arise. Of course, the conducted transcreation in this video is rather amusing, but in global marketing, transcreation is an important tool to dissolve culture and language boundaries. This implicates the adaption of the context, tone and style from one language into another.

The term transcreation was coined in 1960, when an expression for the description of a translation of creative and copy was needed. According to the Oxford English Dictionary (2000-: s.v. transcreate, v.), the word transcreate means to ‘create by or in the way of transmission’. Indeed, transcreation is not a word-for-word translation, but rather a creative translation, where the cultural differences of the target audiences are considered in order to create a meaningful, yet accurate translation.

However, this video should not only awaken our interest in transcreation; it needs to be emphasised that the use of specific nonstandard lexis, grammar and pronunciation is often wrongly perceived as being incorrect. Linguists persistently stress that Standard English is in no form superior to any spoken dialect and that linguistically no dialect has a lower status than Standard English.

Despite these efforts, prejudices against nonstandard varieties are difficult to eradicate. As the linguist David Crystal describes in his book How Language Works, speech ‘is the most universal way of expressing our identity’. Local communities tend to have shared linguistic features, which reflect the relationship of its speakers and differentiates them from other communal groups. From a linguistic perspective, the differences between the ‘slang’ of a youth gang in Peckham and the church with their archaic grammar and vocabulary are insignificant because both distinct and diverse languages have two purposes: to express a certain belonging to each group, and therefore acceptance and respect within the group, and to isolate other speakers that are not familiar with the linguistic norms used by the community.

The former rapper Doc Brown aka Ben Smith was born in Kilburn, northwest London. At present, he is more interested in amusing people with his unique humour, but also acts as a screenwriter, voiceover artist and actor. Find out more about the artist.

Visit our transcreation webpage or contact us for more information.