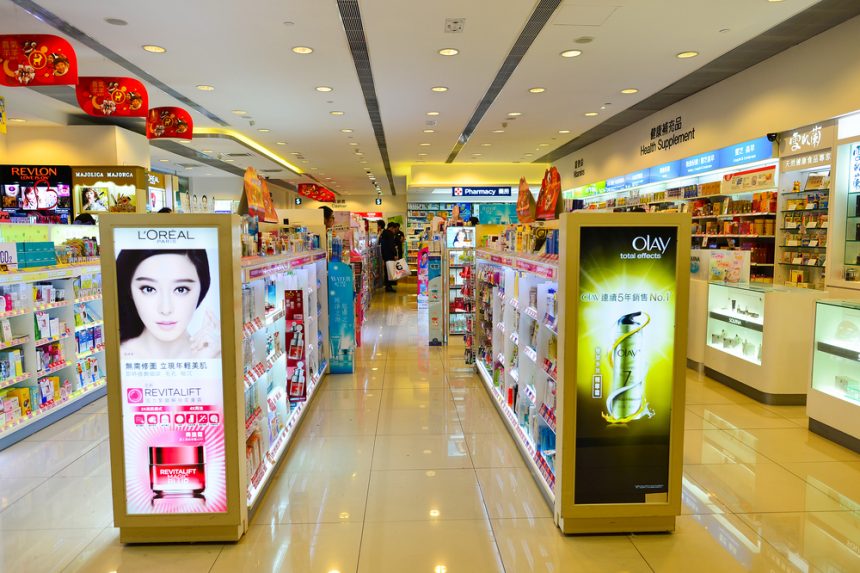 With middle incomes rising in many emerging markets, new middle-class consumers across the world are increasingly spending their new disposable incomes on cosmetics and beauty treatments.

It’s a trend that’s not lost on corporate giants such as Unilever, which has recently acquired British skincare brand Ren in 2015 as well as Korean skincare brand Carver Korea in 2017. The massive consumer goods company intends to expand into new markets with these brands.

Estée Lauder, one of the biggest cosmetics firms in the world, has growth ambitions in Asia with more stores opening and plans to hire thousands more staff. Their portfolio includes natural skincare brands such as Origins and Aveda.

In Asia it seems there’s growing consumer awareness of health and well-being, resulting in annual growth of 15% in the market for natural cosmetics across the continent as consumers demand natural and organic beauty products.

There’s low availability of the kinds of products and ingredients that can satisfy this demand locally, which opens up opportunities for importers. In addition, not many Asian firms have yet been as successful at developing natural and organic skincare brands as Western ones.

In 2012 Estée Lauder applied its strong marketing expertise to creating a dedicated brand for the Asian market, Osaio. This brand is focused specifically on promoting a youthful appearance for mature skin: older demographics are an increasingly large segment of many Asian populations so this is likely to be a growth area. This is just one example of how Western brands are leveraging their branding expertise in this area to compete against local rivals in increasingly important Asian markets.

For companies like Estée Lauder, which is presently finding operating conditions in Western Europe a challenge, the prospect of moving into new markets in the east is an appealing one. Vietnam is one of the countries already on the company’s radar. It seems bricks and mortar is the way to go for this retailer as only a small number of their sales are online.

China’s market for cosmetic products is thought to be growing at over 13% a year.

While there has been a recent slowdown in the Chinese economy, the Chinese government recently announced that it is to cut import tariffs on consumer goods, including skincare products, some Western-style apparel and nappies which could be a boon for cosmetics manufacturers and retailers.

At present about a third of China’s cosmetics market belongs to L’Oréal but it’s South Korea that really carries the most influence as far as China’s consumers are concerned. South Korean’s entertainment industry, in particular, soap operas and pop groups, are particularly influential in terms of beauty standards. The South Korean beauty industry tends to have an innovative approach and a fast turnaround time – vital for getting hot new eye shadow or lipstick colours into the shops.

Whilst the West may be able to field considerable brand expertise, a great deal of innovation is now coming out of Asia, especially South Korea. In fact, with Asia responsible for large chunks of the revenue for many global beauty brands, it’s becoming increasingly common to develop products for the Asian market first before sending the ideas westwards almost as an afterthought.

Asian innovation, especially from the vibrant South Korean beauty industry, is increasingly influencing the West. Ideas such as multi-step skincare portfolios and simplified skincare/makeup hybrids like BB creams have originated or been popularised by the East, and new Asian approaches to face masks seems to have reinvigorated this stale market in Europe and America.

Innovative concepts from South Korea’s beauty R&D labs, such as carbonated skincare products are also being sent West by companies hoping Asian trends will catch on with Western consumers.

Brands obviously need to confront differing consumer expectations about beauty in all the markets in which they operate. Asian consumers seem to place particular value on skin hydration, more so even than anti-ageing properties, and that concept is being introduced to Western consumers via water gel products to see if they catch on in the same way.

Other local beauty standards highlight more profound cultural differences. In many of the Asian markets beauty products include whitening ingredients as standard: some Western expats grumble that they can’t even find an underarm deodorant in Japan that doesn’t contain skin whiteners.

That’s more than a mere cultural divide; for western brands such as Unilever, it’s also a PR hazard. Unilever drew negative attention in the West for its activities promoting skin whitening products in Pakistan and Thailand. However, the negative attention the campaigns attracted in Unilever’s home market was very limited. Unilever would no doubt justify any PR risks in relation to the huge market for these kinds of products. Asia’s huge market is often worth taking risks for.

Japan represents the world’s second-largest beauty market, worth about $50 billion. But Western brands ambitious to grow into this market can’t just move their existing products overseas and expect results.

Like many Asian markets, Japan has different values and expectations for beauty standards than Western consumers, and competition can be extremely fierce. So brand positioning and differentiation are key to gaining a foothold in the Japanese beauty market.

In discerning Japan even cheap brands are held to high standards by consumers.

So, market entrants to Japan from overseas often prefer to target their expertise on the upper end of the market rather than chance their arm in the aggressively competitive lower end.

Luxury brands targeting the Japanese market still face the demanding standards of the Japanese consumer: for example, packaging will need to be of a higher standard than for Western consumers. Don’t be daunted however: Japanese audiences tend to be open to new and innovative beauty ideas from the West and the right product (in the right packaging) can still succeed there.

A credulous yet suspicious audience

There’s some evidence that Chinese audiences are less cynical about the beauty industry than Western ones, and believe that the standards of appearance shown in adverts for beauty products are actually attainable.

Consumer confidence in the health, beauty and well-being industry is increasingly a hot topic in some parts of Asia where fake products are rife, especially those purchased online.

Some local consumers have taken to buying from overseas sellers in the hope of obtaining real branded products. Western brands are competing against counterfeit versions of their products online; having a bricks and mortar presence in the region is a way to reassure customers that they can obtain the real version through offline sales.