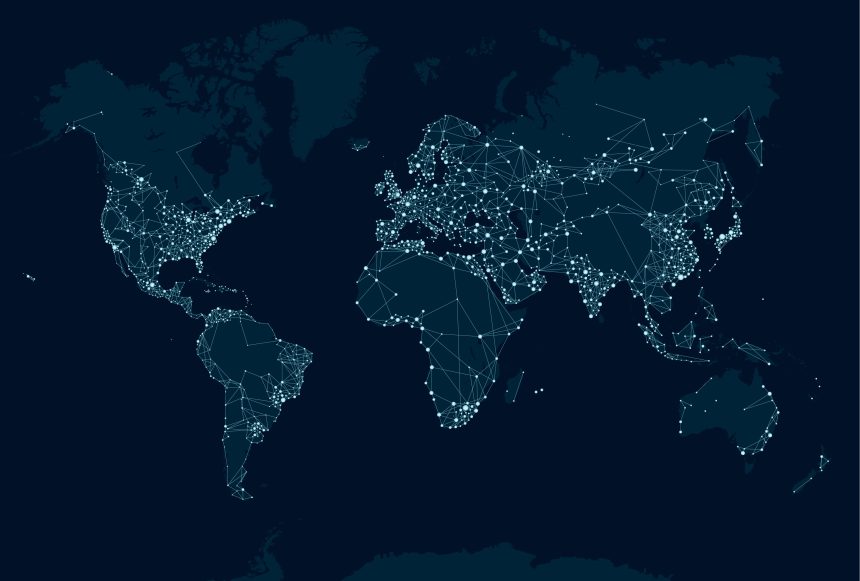 We’re accustomed to the notion of countries building their wealth by the trade in goods and services but the idea of global wealth developing via the flow of data is a novel concept. Yet according to a thorough study by McKinsey, the flow of data and information now generates greater economic value than the global trade in tangible goods.

This transfer of data helps existing industries grow, perhaps by accessing new markets, and it helps new ones emerge. The picture that emerges from McKinsey’s data is of a world where developed countries are more connected by data flows than emerging ones, and where knowledge-intensive data flows grow faster than labour or capital intensive ones.

Understanding how data is transmitted around the world reveals new patterns of digital globalisation.

The world’s most recent economic crash saw a contraction in international financial transactions, which has subsequently persisted owing to changes in the rules. International capital transfers fell in 2008, and have not yet fully recovered.

Banking flows to the Eurozone, tackling residual debt and the recovery of its banking systems, remain lower than pre-crisis. But the ever-increasing flow of data around the world has more than compensated for the decline in transaction volumes.

In fact, world GDP is thought to be worth 10% more than it would be without cross-border flows.

A huge variety of types of data are exchanged between countries. Many people worldwide have social media profiles that can be accessed internationally. They may provide labour services online, such as photo editing or language tuition.

They create content that’s viewed by other users thousands of miles away or download songs by foreign artists. And they transact with businesses and peers in other countries.

Meanwhile, companies are transferring internal data between international teams and supply chains. In addition, an estimated 12% of international trade in goods is cross-border e-commerce.

Firms also benefit from the new data transfer environment by making better use of their global big data, as well as implementing efficiencies using data for supply chain management and back office consolidation.

When it comes to the exchange of tangible goods such as boots, butter or bauxite, consumers tend to trade-off between cheaper goods that are sourced close to home, or ones from further afield that are perceived to have higher value.

Goods purchased from a great distance away can take much longer to arrive and the transaction may be riskier. Often they may offer some other qualities such as authenticity that the consumer feels is best supplied by a foreign vendor.

There are also transportation costs to be factored in, as well as customs taxes, making the transaction more expensive irrespective of the good’s cost in its home market.

When it comes to data exchanges, the same rules don’t apply and consumers don’t have to make the same tradeoffs between price, proximity and quality.

It isn’t true that data can be transported internationally without any barriers at all; there are rules and regulations governing the flow of personal data between political territories, for example. But the same physical barriers simply don’t apply, and it’s very difficult to police international data transfers. Hence the rise in international film and music piracy.

The growth in international trade and development has a long and fascinating history. We’re pretty sure that pre-historic residents on remote Scottish islands were trading with what is now modern day France, presumably using sea routes.

We know camel trains brought exotic goods such as silk from Mongolia and China to Europe from around 206 BC onwards. Particularly in the last century, physical infrastructure was developed to support this global trade in goods, and international organisations have been set up to manage its rules and regulations.

It’s unclear how easily this global trade system will adapt to these new forms of exchange in value, if at all. In only 15 years, the world has gone from having negligible data transfers to a value flow in data that eclipses the trade system that’s developed over thousands of years.

That’s the digital equivalent of taking only a decade and a half to progress from trading animal skins to the sophisticated international supply network of a modern car plant.

In the decade from 2005, the volume of cross-border bandwidth increased 45 times. It’s hard to find many equivalents in terms of human progress. No wonder authorities can’t keep up.

Data flows are often far more nimble than movements of tangible goods, and they’re less visible than transactions in services.

Although data transfers require their own infrastructure, there aren’t such obvious gatekeepers to these transactions. There’s no customs officer scrutinising the movement of data, and the only way to halt the data movement is pretty much to pull the plug on the entire internet (something that governments have done before, usually to crack down on civil unrest).

One of the things that’s particularly exciting about the information age is how quickly growth can occur, and how new players can participate in global exchanges. It seems that the flow of data across borders can escalate far more rapidly than is usual for a comparable flow of goods or services, and smaller participants can join the game.

McKinsey’s research shows a great increase in activity between countries in the southern hemisphere, and expanding data flows to and from developing economies.

Meanwhile, small organisations can participate in global transactions that once would have been the sole preserve of major organisations.

McKinsey analysts observe, “while the last era of globalisation was driven largely by sourcing low-cost production, the next era will centre on the rise of the global knowledge economy.”

It’s a global gold rush that looks set to continue for some time still. Data transfer has the potential to be a highly positive – though highly disruptive – force for the global economy.

Technology for the Legal Services Sector