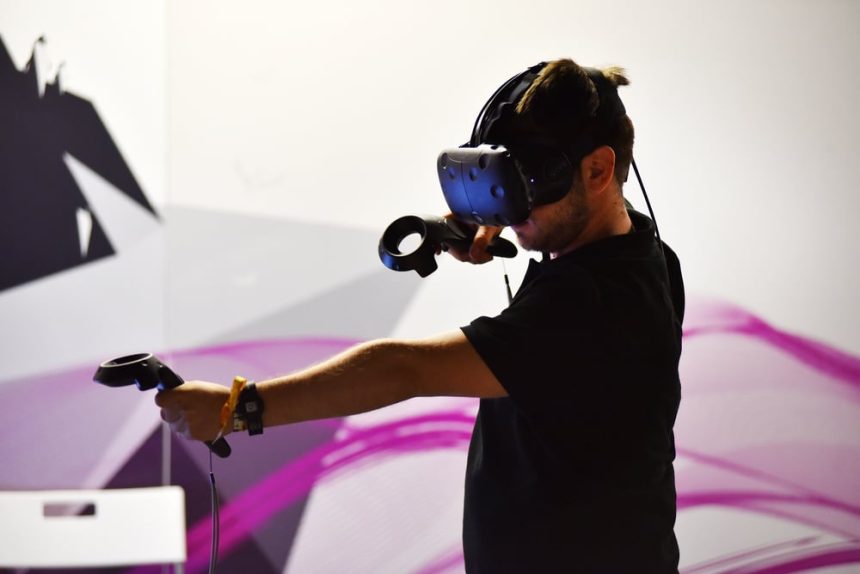 Virtually Reality (VR) has been the talk of the gaming community since Facebook’s Mark Zuckerberg acquired Oculus in 2014. But despite the major players in VR hardware launching devices throughout 2016, the new gaming devices have yet to take off commercially.

Gamers are used to being faced with their current gaming platform being surpassed by an updated model and are encouraged to buy into the latest technology.

VR gaming is now officially here. From high-end platforms like the HTC Vive and Facebook’s Oculus to Google’s affordable Daydream and the Samsung Gear VR, breaking into the commercial gaming market with a niche product is the next crucial step in VR gaming.

The obvious obstacle from a consumer’s perspective is the price. While VR gaming has been in the press for a number of years, making VR gaming accessible is vital for commercial success.

Current VR headsets on the market are split into two types – tethered and mobile. Tethered devices are powered by PCs or gaming consoles such as the Sony PlayStation (for the PlayStation VR headset) and mobile headsets work with a compatible smartphone.

While the Samsung Gear VR (£59.00) and Google Daydream (£69.00) are modestly priced, the user would still need to purchase a compatible premium smartphone in order to use these headsets.

On top of this, buying into low-end VR devices means compromising on overall gaming performance as high-end devices use the processing power of a high-spec PC.

High-end VR, on the other hand, comes at a cost. The HTC Vive comes in as the most expensive starting at £900, followed by the Oculus Rift at £550 and the PlayStation VR starting at £350.

On top of this, the need of a VR-ready system means that non-gamers would be significantly priced-out. This leaves the high-end market open only to early adopters and hardcore gamers who have high-performance PCs.

Accessibility will play a key role in the popularity of VR gaming. Currently, there’s less than one per cent of the 1.43 billion computers in the world with graphical capabilities to support VR gaming. While there are opportunities for high-end PCs to be optimised, the process can be costly and bandwidth usage intensive.

A compatible graphics card, VR headset plus additional peripherals could make the cost of your initial VR experience well over £1,000.

Most games targeted at dedicated players are marketed for hundreds of hours of gameplay with each session taking up to 3-4 hours in length. This lengthy gameplay in a VR environment would be exhausting for the player over time and game manufacturers are against such excessive use. There are also issues of motion sickness experienced by users when using VR headsets.

If developers want traditional video game users to cross over, games produced for the VR environment need to be able to engage with users who are used to a totally different gaming experience. Gamers also need to know from the initial stage of buying into VR that they’ve made the right investment.

Developers would need to consider creating games and content aimed at mobile gamers and traditional gamers alike in order to tap into the mobile VR gaming market. This could mean creating additional content that requires less processing power or building on current popular mobile games like Clash Royale, Clash of Clans and Pokémon Go.

Optimising headsets to be compatible with a wider selection of premium large-screen devices could also be an option for manufacturers in the future to attract new users.

Sony has huge potential to tap into the commercial gaming market with its PlayStation VR headset. Although there are a limited number of VR games currently available, Sony has the advantage of developing more games for the VR compatible PlayStation 4 which has sold over 53 million units worldwide.

With over 65 million active monthly members on the Playstation Network, Sony also has a wealth of user data they could use for game development in order to create titles targeted to dedicated Playstation 4 users.

Virtual Reality developers are still trying to figure out an effective model to generate revenue from VR gaming. However in-app purchases and premium content look likely to be the initial forms of monetisation.

As the VR user-base increases, brands could potentially partner with hardware companies to target new audiences. This could be a huge asset for the Oculus Rift which could soon have access to the entire Facebook network.

As the largest mobile gaming market in the world, China has embraced Virtual Reality gaming much more than the West.

A recent survey produced by Niko Partners concluded that nearly half of Chinese gamers showed an interest in VR gaming with nearly 30% willing to spend up to $200 on a VR device. Coupled with the average annual salary at $1,280, it seems that the current level of engagement in China is considerably higher than other parts of the world.

The popularity of Mobile VR hardware in China can be attributed to major investment in mobile VR gaming for the consumer. Mobile phone providers such as Huawei, and a number of startups including Pico VR are working together to provide more game titles and affordable headsets to the mobile consumer.

High-end VR gaming is targeted towards local businesses who have taken an interesting social approach to delivering high-quality VR gaming.

VR internet cafes and arcades offering ‘experience zones’, allow users to access high-end VR for as little as $5 per session.

These VR experiences – usually in motorised pods – allows users to be fully immersed in another world and have become popular in a number of cities across China. This has led to many businesses diversifying their business models and investing more into large scale VR experiences.

Spaces, a Los Angeles-based VR company has recently partnered with Songcheng Performance
Development in a $30 million deal to bring VR experiences to Songcheng parks across China.

Shanda Group is currently investing $350 million in creating a dedicated VR theme park. In partnership with The Void, a US based company specialising in VR technology, this is currently the largest investment made in VR in China so far. These large-scale deals could see China having a considerable head start in the global VR gaming market.

It’s still too early to tell when this ‘next generation of gaming’ will be a commercial success. With devices offering unparalleled levels of immersion, it’s definitely an exciting time for virtual reality as it takes its first steps into the booming gaming sector.

Virtual reality is here and developers seem determined to improve its current offering to make it the future of gaming.

Matt Train is Operations Director at TranslateMedia - responsible for working with clients and system integration partners to advise, plan, and deliver multilingual digital content for international brands and content publishers.