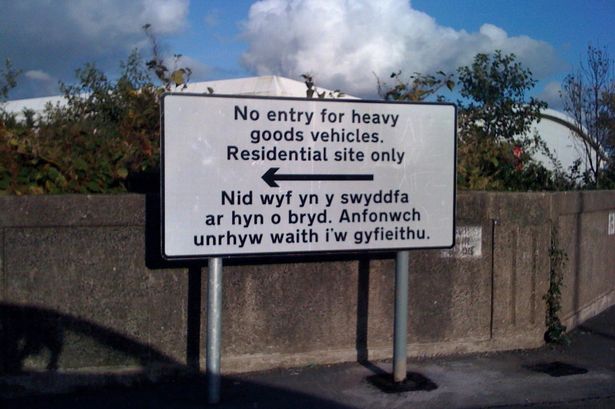 Government officials who requested a translation for a Welsh road sign thought they were receiving their translation via an email reply. They sent the text “No entry for heavy goods vehicles. Residential site only.” to Swansea Council for translation into Welsh and awaited a response. However, the response they received was Welsh for “I am not in the office at the moment. Send any work to be translated”.

Officials assumed the response was the content they required and promptly approved the text for use on a road sign used to halt heavy goods vehicles near an Asda store in the Morriston area.

“When they’re proofing signs, they should really use someone who speaks Welsh,” said journalist Dylan Iorwerth.

In Wales, all official road signs are bilingual, however, it is unclear why officials without Welsh language skills were allowed to authorise the content for use on the Welsh road sign without the text being checked for accuracy by a Welsh language speaker. It took local Welsh speakers to point out the embarrassing error.

Welsh-language magazine Golwg was promptly sent photographs of the offending sign by a number of its readers.

Managing editor Mr Iorwerth said “They’re circulating among Welsh speakers because, unfortunately, it’s all too common that things are not just badly translated, but are put together by people who have no idea about the language.”

“It’s good to see people trying to translate, but they should really ask for expert help. Everything these days seems to be written first in English and then translated. Ideally, they should be written separately in both languages.”

A council spokeswoman said: “Our attention was drawn to the mistranslation of a sign at the junction of Clase Road and Pant-y-Blawd Road.

The blunder is not the only time Welsh has been incorrectly translated on road signs:

A sign on Malpas road, Newport, wrongly suggested no access for people who do sports coaching in its Welsh translation.

A sign that was supposed to translate “Business open as usual”, was mistranslated into Welsh as “snooping closed as usual”

A sign between Cardiff and Penarth telling cyclists they had problems with an “inflamed bladder”.

“Rhybudd: Gweithwyr yn ffrwydro” in Welsh, which translates as “Warning: Workers are exploding”.

An advert for a special weekend to celebrate shear birds, “Shear Madness”, in English turned into something quite different in Welsh – “Cneifio Gwallgof” or “Mad Sheep Shearing”.

The Challenges Wearable Tech Poses to the Fashion Industry