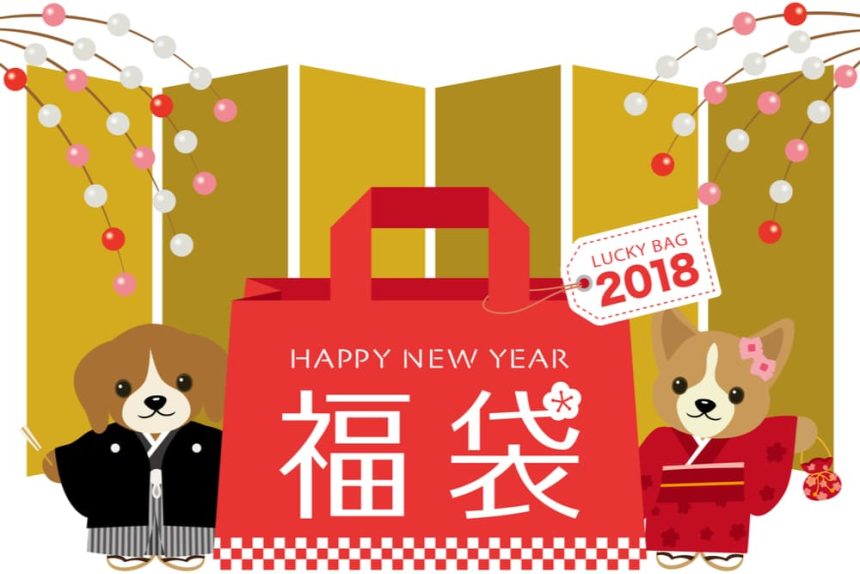 Around the turn of the new year, Japanese retailers start offering their customers mystery bags known as fukubukuro. Customers pay a set price but they don’t know what they’ll receive when they open the sealed bag. It’s always a good deal – the items in the bag will be worth much more than the price they pay for it.

Fukubukuro generally cost between £20 and £200 depending on how exclusive the store is. Typically there are at least 5 items in the bag, including at least one ‘lucky dip’ prize item, which could be very valuable. Shoppers are prepared to pay this because the items inside are by convention worth much more than the bag’s ticket price.

IKEA’s most recent bag was considered to be excellent value. Retailing at 2,000 yen (under £14) the Kitchen Goods Lucky Bag contains 14 items with in-store value of 6,000 yen; a bargain by anyone’s standard.

To add an additional incentive, many retailers will also slip even higher value items into a small number of bags to make fukubukuro event something of a lottery. Brands such as Apple tend to do this. In fact, Shoppers still talk about the time a lucky customer found an 11 inch MacBook Air in their 3,300 yen lucky bag (around £22).

Fukubukuro (福袋) is a portmanteau of the words for ‘good fortune’ and ‘bag’. In a tradition dating back around 100 years, Japanese stores typically offer them in the New Year from 2nd January.

At the same time, Westerners are queuing for the January sales and Japanese consumers are eagerly waiting in line for their chance at the lucky dip. The longest lines tend to be outside major department stores and malls, although there are now options to pre-order your bag online (some people think that takes some of the fun out of the experience).

Scarcity is part of the appeal. Most stores have a limited number of bags on offer, sometimes as few as 100, so it’s really necessary to get in the queue early. After you get your bag, there’s often the chance to trade items with others in a kind of frenzied post-shopping experience.

Fukubukuro season is a fun and lively shopping holiday, not unlike a politer version of America’s Black Friday.

This being Japan, there’s often a symbolic aspect to the contents of the fukubukuro. Early this year the Tobu department store celebrated its 55th anniversary with special fukubukuro for the numbers 55 and 2017. The mall was offering a very small number of 550,000 yen jewelry bags as part of the experience, as well as fresh fruit bags at 2,017 yen.

Fukubukuro is such as tradition in Japan that foreign brands also join in the fun. Ikea, The Body Shop and McDonald’s have both offered their own versions of the lucky bags. McDonald’s offered branded merchandise including a face towel and stuffed toy in the shape of a Big Mac, while Starbucks offered coffee beans and a mug set.

Back in the early 20th century, the first Fukubukuro contained clothing items. These days a much wider range of goods is on offer, with fast food chains even offering food products in their lucky bags.

KFC offered a bottle of its popular honey maple sauce, for example, and others give vouchers for free meal combos.

Although the contents are meant to be a surprise to the buyer, there’s still the option to buy a fukubukuro tailored to your needs. Some bags will state a clothing size, others such as those offered by The Body Shop allow buyers to personalize their bag from a range of options for fragrance.

There’s always a temptation for brands to stuff the fukubukuro with goods they are trying to get rid of as part of a spring clean of stock. This can backfire on retailers, particularly in the social media age when they may be caught out publicly if they offer a disappointing bag.

But some retailers embrace this by deliberately offering so-called utsubukuro (“depressing bag”). Sold at a low price these usually contain cheap items at a bargain price.

Modern Japanese consumers will often share the contents of their surprise bag on social media, which can provide a nice brand boost. There’s an ‘unboxing’ trend, where customers film themselves opening their bags. It all contributes to making the shopping occasion fun and exciting, and can be a nice brand boost for retailers who succeed in delighting their customers.

Some retailers help avoid the risk of consumers being disappointed by the content of their bag by revealing some, or even all, of the contents in advance. Sometimes they make it part of an ad campaign, other retailers even chose to create transparent fukubukuro packaging. Shopping purists claim this defeats the entire object of the fukubukuro experience.

Canny modern retailers are well aware that coveted fukubukuro will bring customers into the store where they may buy other items in addition to one of the bags. Fukubukuro are offered at the same time as the January sales begin, so they aren’t the only bargain on offer at that time.

For many retailers though it’s more of a marketing exercise than a money-making venture. Offering fukubukuro can really delight your customers and leave them with a highly positive brand experience; some brands even craft items specifically for their lucky bags rather than use them to offload older stock.

Some retailers consider the line outside their store in the first days of January to be a sign of how much their customers trust and esteem their brand.

If you’re venturing into Japan’s market, you should certainly consider what you plan to do around the New Year. Other retailers are likely to be attracting customers into their stores with tempting fukubukuro offers. If you don’t plan to offer these bags, you may need to find other ways to present an attractive prospect at this time of year.