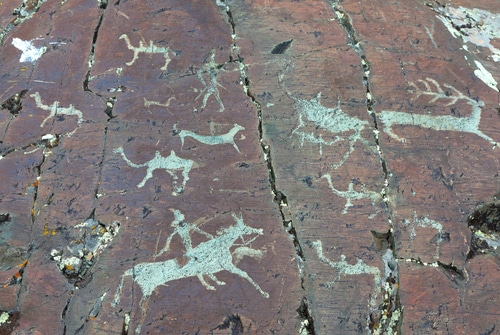 A recently published study by the University of Liverpool has found that the same brain activity is used for language production and making complex tools. Consequently, the findings support the theory that they evolved at the same time.

The Liverpudlian university tested the brain activity of ten expert stone tools makers (flint knappers). Seven participants were male, three female and the mean age was 38 years. Two male participants were left-handed, all the others right-handed.

The subjects undertook a standard language test and a stone tool-making task. As the participants carried out both tasks, the brain blood flow activity was measured, using a functional transcranial Doppler Ultrasound (fTCD), which is commonly used in clinical settings to test patient’s language functions before a surgery or after brain damage.

The analysis showed that the brain patterns for both tasks correlated which suggested that they both use the same area of the brain. It is stated in the research paper that “highly correlated hemodynamics in the initial ten seconds of task execution” was shown.

Stone tool-making and language are considered to be unique features of human beings that evolved over millions of years. It is a rare ability to share complex thoughts among individual brains and the evolution of the human mind, including the power to create a potentially infinite variety of thoughts expressed in the form of sentences, art and technologies, is remarkable.

The researchers conclude from the study that the results support the hypothesis that aspects of language might have emerged as early as 1.75 million years ago with the start of Acheulean technology – the first standardized tradition of toolmaking of Homo erectus and early Homo sapiens. Up until now it has been assumed that the emergence of unique toolkits occurred over 2.5 million years ago, whereas the emergence of language ranged from 1.9 million to 50,000 years ago.

“It was from the making of tools that early humans first developed their ability to project complex thoughts or mental representations outside the individual brain,” says John Hoffecker, CU-Boulder research associate.

The crafting of stone hand axes about 1.6 million years ago is thought to be one of the first external representations of internal thought. Ancient hand axes achieved a high status as mental representations because they bear little resemblance to the natural objects they were made from – in general rock fragments and cobbles.

“They reflect a design or mental template stored in the nerve cells of the brain and imposed on the rock, and they seemed to have emerged from a strong feedback relationship among the hands, eyes, brains and the tools themselves,” says Hoffecker.

The first to suggest that language and tool-use might have co-evolved was Darwin. He observed that both depend on complex planning and the coordination of actions. However, up until now, very little evidence has supported this statement.

Dr. Georg Meyer from the University Department of Experimental Psychology says that “this is the first study of the brain to compare complex stone tool-making directly with language. Our study found correlated blood flow patterns in the first ten seconds of undertaking both tasks. This suggests that the two of them depend on common brain areas and is consistent with theories that tool-use and language co-evolved and share common processing networks in the brain.”

Dr. Natalie Uomini from the University’s Department of Archaeology, Classics & Egyptology mentions that “nobody has been able to measure brain activity in real time while making a stone tool. This is a first for both archaeology and psychology”.

When taking the language test, which consisted of a cued word generation task, participants were asked to silently generate words starting with a letter heard at the onset of the target interval. Target letters were presented in random order and no letter was presented more than once.

In terms of the knapping task, the subjects were asked to produce or continue producing a “generic” hand axe in the target interval. This included manipulating the core, preparing the platform, and removing flakes by striking the hammer stone against the flint core.

Making a hand axe requires both working memory and planning memory and this action planning draws on brain areas that are shared with language tasks. The research paper hence concludes that “the same brain networks are being activated for both tasks. They suggest that tool-making and language share a basis in more general human capacities for complex, goal-directed action.”